Mission 823 is actively involved in three major aspects of reduction and elimination of human trafficking in Eastern Europe:

PREVENTION: Identifying at-risk children and teens and providing opportunities for self-improvement and inclusion in family units. Providing awareness and resource materials to children and their communities.

RESCUE: Working in cooperation with local and international task forces and law enforcement, facilitating the rescue of victims held in modern-day slavery.

RESTORATION: Providing physical, spiritual, emotional and psychological healing in order to stabilize these young people and prepare them for real world re-entry.

What is Human Trafficking?

Human trafficking is the business of stealing freedom for profit. It is a multi-billion dollar criminal industry that denies freedom to 24.9 million people around the world. It can happen to anyone but some people are more vulnerable than others and traffickers often identify and leverage their victims’ vulnerabilities in order to create dependency. It is a notoriously underreported crime.

Human Trafficking Definition: Under U.S. law, trafficking in persons is defined as “sex trafficking in which a commercial sex act is induced by force, fraud or coercion, or in which the person induced to perform such act has not attained 18 years of age;” or “the recruitment, harboring, transportation, provision, or obtaining of a person for labor or serviced, through the use of force, fraud or coercion for the purpose of subjection to involuntary servitude, peonage, debt bondage or slavery.”

Human Trafficking is a $150 billion a year global industry where more than 40 million people are trapped in modern-day slavery including forced marriages. $100 billion a year is derived from sexual exploitation.

24.9 million of these individuals are used for profit in some form of human trafficking.

6,225,000 children are regularly exploited and held captive for an average of two years. This is also the average life span of a child caught in human trafficking in Eastern Europe.

It is almost impossible to fight a giant of this magnitude when there is only a .06% prosecution rate of the perpetrators globally. Most often, the victims are criminalized in drug and prostitution arrests.

Boys and girls are exploited almost equally and as young as infants.

Three basic types of human trafficking are operating globally: sex trafficking, labor trafficking and drug trafficking. Forced marriages are another form of involuntary servitude. Human organ trafficking comes into play in all of the above scenarios.

Because of its covert nature, hidden from the general public, human trafficking is difficult to find, track and prosecute.

Traditional sting operations like those used in the Caribbean and SE Asia are virtually useless in this region.

Although it is difficult to quantify, there are potentially 300,000+ human trafficking victims annually.

What Are The Signs Of Human Trafficking?

Law Enforcement and Human Trafficking Task Forces have had some training, but are understaffed and underfunded. These teams need additional specialized training, especially in the areas of Financial Investigation, Cyber-tracking and Identification. 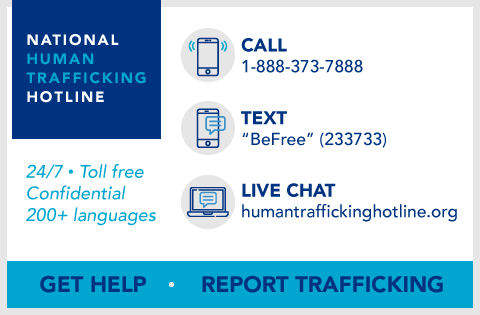 Our Partners in the fight in Ukraine: